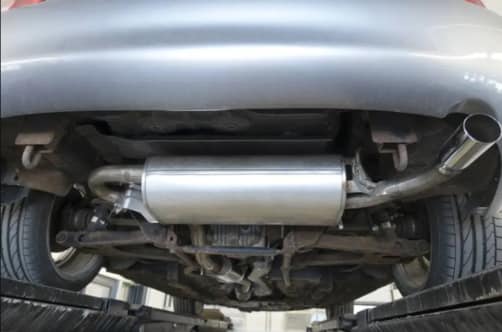 Do you want to know what does a muffler do? In this article, you will find a complete guide about the best exhaust mufflers.

The muffler is one of the most important and crucial parts of the car’s exhaust system.

Its main function is to expel the toxic gases produced during combustion out of the car and improve its performance by damping the noise produced when they are exposed.

Each vehicle brand has its own exhaust design with different designs for its different car models. But, they all work the same.

In addition, it is essential as it improves the efficiency of the combustion Silverado engine.

Therefore, even a small problem with the muffler, such as a hole, can damage your vehicle. If you find any damages to your car’s muffler, it is advisable to replace it as early as possible. In this post, we will also learn how to replace it?

Exhaust Muffler: What is It

An exhaust muffler is also called a silencer. The muffler is used to reduce the low-frequency noise generated by the engine operation.

It has a Chamber with several internal divisions through which the gases pass. In this way, the sound waves of the noise lose pressure, and therefore the noise decreases.

A rear silencer is primarily responsible for exhaust gas after treatment and the reduction of noise emissions.

Like all silencers, ESD is used in vehicles with a combustion engine. As the name suggests, it marks the end of the exhaust system. The rear silencer is also often referred to as an exhaust, muffler, rear silencer, or muffler.

A rear silencer minimizes the sound waves and accordingly ensures that the vehicle complies with the legally prescribed volume. For this, the component usually uses the reflection principle.

Moreover, a reflection silencer has several chambers inside, through which the sound propagates. As a result, sound energy is lost, and the volume is reduced accordingly.

Different Types of the Muffler

The complete exhaust system consists of exhaust pipes and one or more silencers. The front silencer and the main silencer can be used.

Usually, several types of silencers are used together in order to capture a large number of disruptive sound waves.

These are the different types of mufflers:

Let us get more details about these different types of mufflers:

The reflection muffler consists of several chambers and tubes connected one behind the other or arranged parallel to the direction of the exhaust gas flow.

The redirection of the exhaust gases in the chambers and tubes of different sizes generates the attenuation of the sound waves. Reflection silencers smooth the sound waves and dampen the low sound frequencies.

In the interference silencer, the pipes have a certain number of branches.

The distances covered by the exhaust gas are of different lengths in the interference silencer; the sound waves overlap and cancel each other out due to interference phenomena.

However, The reflection silencer dampens the low sound frequencies.

Silencer-Resonator One distinguishes the resonator according to the sound frequencies in high-pass dampers and low-pass dampers.

What Does A Muffler Do: Complete Mechanism

The normal operation of an engine generates fumes that are released at very high pressure.

A gas that carries noise that, were it not for the silencers, could become deafening to people both outside and inside the vehicle.

Therefore, the role of mufflers in cars, motorcycles, trucks, and, ultimately, any vehicle with a combustion engine is to modify and reduce this annoying noise.

A task that has been perfected over many years of development and that today is achieved thanks to several methods combined in the same silencer.

How is a Silencer Inside

It all depends on the needs of the vehicle in question.

The simplest ones are limited to having a perforated inner tube wrapped in fiberglass and all this covered by another smooth tube with a larger diameter. A typical system for some motorcycles.

Inside of a Muffler

On the other hand, if we go to those that are usually used in cars, the interior can be somewhat more complex.

They are made up of several chambers in charge of different damping frequencies of sound. Each car will have a different distribution, but ultimately it is about making the sound travel as long as possible.

However, to achieve this, it is not about creating tremendously long conduits but about forcing the sound to bounce as much as possible within the different chambers.

The compartment in question may be only a few inches wide, but if the sound bounces thousands of times in an interior, it will be like having traveled much more distance than it seemed at first.

Next, we are going to detail how this type of silencer works.

Where is the Rear Muffler

Before the exhaust gases get outside from the engine, they pass through various stations. Put simply, and the exhaust system consists of an exhaust manifold, downpipe, catalytic converter, silencer, and tailpipe.

The exhaust manifold is located directly on the cylinder head of the engine and directs the pollutants directly into the Y-pipe.

From there, the exhaust gases reach the catalytic converter, which acts as a filter and is responsible for exhaust gas detoxification.

If available, the front silencer and middle silencer then connect. Modern vehicles often do without the former, as the Kat already minimizes a considerable part of the sound waves.

How Does Exhaust Muffler Work

Let’s start with the path that noise travels from the engine to the muffler: when the exhaust valves in the combustion chambers open.

The smoke is pushed out at high speed. In other words, high-pressure burned gases are discharged into the exhaust manifold.

From there, they go to an intermediate pipe, where they expand and progressively lose their pressure.

This increase in volume will generate sound waves with a shorter retention time than exhaust gases. Which interact directly with the muffler, where the noise they produce is minimized.

The silencer then converts this energy from the sound wave into heat, passing it through various chambers and tubes with different absorption systems.

Each manufacturer decides what the best combination of methods to reduce engine noise is, but below, we are going to describe how one of the most common in cars works:

Sound enters the muffler through a perforated main pipe and is surrounded by a larger exhaust pipe tube. It is the first noise reduction system called a side resonator, which is effective at certain sound frequencies.

It works because some of the gas is forced through small holes and bounced back into the large pipe that surrounds it. In this way, when it passes through the holes again, it does so, having lost a large part of its energy.

The second noise reduction system is the expansion chambers. These are chambers larger than the main pipe, through which part of the gases will pass.

Then they will have to go back into a pipe the same size as before.

Thanks to this and its geometry, the sound frequencies diversify and some return the way they came. Others simply lose energy inside the chamber, bouncing off its walls.

Lastly, the third method of this silencer is the Helmholtz resonator. A camera where the most powerful frequencies generated by the motor are going to be eliminated.

Actually, it is an interference silencer, which works thanks to a very curious resonance effect.

Depending on its size, this camera will return the same frequency of sound that it tries to input. In other words, it will cancel out the sound waves with equivalent but opposite ones.

How To Replace A Muffler: The Entire Process

Why Does Need to Change A Muffler

The muffler must be changed when it no longer fulfills its main function, to reduce noise during the exhaust of emissions, especially since it can cause a higher fuel consumption.

When Do You Need To Change The Muffler

The mufflers are designed to last the same as the useful life of the vehicle. However, this is conditioned by the use that is given to the vehicle.

A muffler is affected by long periods of immobility of the car or by taking very short trips.

If the indicated kilometers have not been met and you hear metallic knocks on the pavement, too much noise when accelerating, or there is an increase in fuel consumption, it is best to check the muffler as soon as possible.

Where To Change The Muffler For Cars

If you are looking to change the muffler for cars, it is best to go to professionals who can provide adequate advice. So, as not to run the risk of damaging any other part of the vehicle or incurring an accident.

It is important that before removing it, the car is cold, and appropriate safety measures are taken to avoid accidents. However, you can also replace it by yourself.

Here in the following, we have given a complete guide. When replacing the catalytic converter, it is recommended to replace the air filter, the spark plugs, and the lambda probe

The car must be cool when starting work to avoid burns. Raise the car on column supports (see safety instructions + place a vehicle on stands).

Step 2: Locate The Muffler You Want To Replace

In some cases, to make the replacement, you have to make a cut to the size of the original tube. Suppose it comes from the factory in one piece.

But the replacement part is designed to fit into the tube after cutting the tube with a dedicated tool or a hacksaw.

Step 3: Use A Sealant To Facilitate Disassembly

Remove the two or three bolts that secure the rear silencer to the center silencer using a collar or flange.

Step 4: Remove And Replace The old Muffler with another best sounding muffler

Step 5: Start The Engine And Check For Leaks

New exhaust elements are impregnated with paraffin and will exhale smoke when the temperature of the exhaust line rises.

With this, we hope that the explanation of “what does a muffler do?” is useful to you to understand the operation of this important part of our car.

The car is a fundamental part of people’s daily lives. For this, it is necessary to pay attention to any detail that is out of the ordinary, such as constant and annoying noises while driving.

A bad muffler produces metal knocking noises on the floor of the car that indicate that the pipes are being moved by the exhaust gases and tend to disorder.

Also, the car tends to make a louder noise when accelerating. Also, it is necessary to check if there is rust or holes in the exhaust pipe and see that it does not present a sand noise, which would indicate that the rock wool is falling apart.