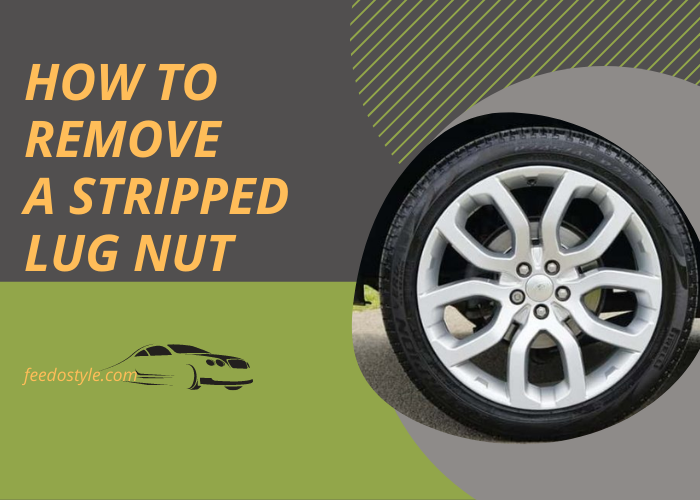 Above all, you are in the right place; here we show you the best and several easy methods to remove a stripped nut, so let’s start.

Most screws and nuts are hex, but most wrenches and other adjusting tools are not.

Wrenches and pliers tend to slip, especially when loosening very tight nuts. The result is that the nut becomes worn or rounded.

Once this process is started, it Freusually only gets worse because wrenches and pliers no longer fit properly and slide more easily.

When the flat edges of a hex nut have typically become rounded, conventional tools – made contact with the angular shape – are no longer effective in loosening the nut.

Fortunately, this is far from an unusual topic, and there are several techniques to fix this problem.

Without any further ado, let us quickly start the top 3 methods to remove a stripped lug nut.

How to Remove a Stripped Lug Nut: 3 Easy Methods

Removing a lug nut is one of the most common tasks for a handyman.

Despite a well-filled toolbox, sometimes the equipment is not suited to the job at hand.

To be able to easily extract the bolts when disassembling furniture, repairing a car, or dismantling an appliance, it is advisable to follow the following tips.

Step 1:Unscrew a nut with wrenches

If the wrench is larger than the bolt:

If the wrench is smaller than the bolt

Over time, the nuts can rust. Then, it becomes tough to eliminate it without forcing them.

Step 2: An Effective Technique to Unblock a Rusty Nut Without Breaking It

Step 3: Remove a Stuck Nut by Heating It

Even after several attempts, the blocked nut does not want to leave its nest?

Do-it-yourselfers who often find themselves faced with this situation do not hesitate to take out their torch or blow-torch. The lug nut will not melt, it will only become more malleable, and the elements that block it will be altered. With this technique, the nut is released in a few minutes:

As a last resort, it is always possible to saw the bolt with a hacksaw.

You have to saw off two opposite sides of the nut and hit them with a hammer or sledgehammer to separate it from the screw.

No matter how useful they are, there will inevitably come a time when they come face to face with a stripped lug bolt that is almost impossible to remove.

There is no need to panic. Most stripped lug nuts, whether on a car, on a bike, or a skateboard, can be easily removed.

All you require is the right tools and patience.

Doing this work at home will save you the inconvenience and cost of taking your project to a mechanic.

Put the controller on the head of the pesky bolt.

Rotate the controller and try to loosen the bolt. Sometimes by allowing additional room, you can slide the bolt out even though it is stripped.

Make sure it is deep enough to insert a screwdriver blade. Inject a flat screwdriver in the slot. Turn the screwdriver and try to “loosen” the bolt.

If it doesn’t work, continue to step 3.

Leave enough yarn to be grasped by a couple of vice grips. The top of the “screw” is now the head of the bolt. Try to extract the bolt with the vice grips.

Press the screw extractor into the hole you have drilled.

Be gentle and do not force the puller onto the screw as it could break. Turn the puller counterclockwise and work the bolt out.

How to Remove a Stripped Lug Nut-Method 2: Using Lubricants and Heat 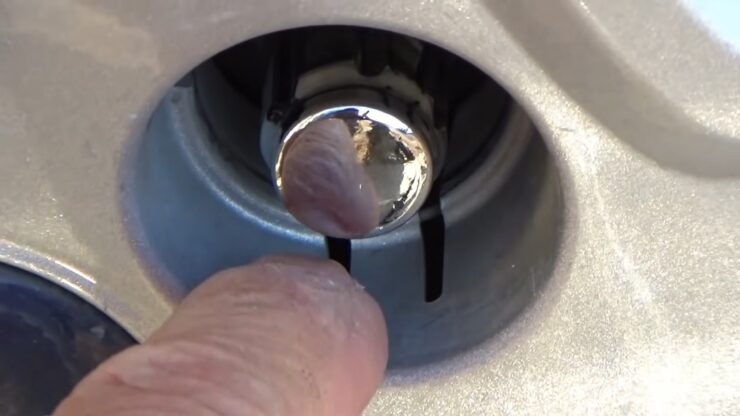 It is quite a challenge to loosen a stripped lug nut.

You don’t give importance to it until the day comes when one or more of one resists you. This will help you with your repairs.

When it comes to a nut and bolt that we can replace with new ones, it may not be a headache but, what if you have to take advantage of the bolt or bolt?

If the previous method doesn’t work, you can try this method.

Well, this is the best known to most, but not always the most effective.

It usually works for light occasions, to call it somehow. When not too much time has passed and the cold welding between the two materials has not reached its total union.

In these cases, applying lubricating oils, the so-called loosening devices can work.

If you are looking for this product, you can find it on the Amazon page. They usually come in aerosol cans; it involves putting a generous jet of oil at the union of the nut with the screw.

Let it do its action for at least ten minutes for said oil to penetrate between the union of both materials.

Then, it is convenient to put the appropriate wrench on the nut and give the wrench a few hits to help loosen the corrosion.

This method is the most effective and comfortable in turn. The problem is that it cannot always be applied due to different inconveniences:

It is about applying heat to the union of the nut with the screw or bolt until it takes on a reddish cherry color.

Be careful not to melt the materials. Once this heat has been reached in said nut and bolt, you must immediately cool with plenty of water so that the materials contract.

Applying heat will make the existing corrosion between the nut and bolt disappear, being free of the cold welding that joined them.

Also, in this case, it is convenient to put the appropriate wrench on the nut and hit the wrench in the direction of loosening the nut (anti-clockwise).

It is a method that rarely fails; it does not matter if the nut has not loosened for forty years.

The effect of heat decomposes the internal corrosion between nut and bolt. The problem is that you cannot always heat the area due to other inconveniences.

We believe this is the least known way to loosen a rusty nut.

We suppose that for different commercial interests so that in the end you go to a professional. This is a trick that a marine mechanic taught me many years ago. He never did it in front of people, and he waited to be alone and apply it.

It is time for more people to get to know him since I consider it a chore not to be able to loosen a nut.

For the technique, you only need a sharp chisel or chisel, and if it is new, the better. And a powerful hammer that allows you to hit the chillers well.

It is about putting the chipper on one of the flat faces of the nut in a transverse direction as if you wanted to cut the nut in half.

Once you have placed the chisel in the center of the nut (because it is the weakest area), you have to give a few blows as if you were trying to split the nut.

It is not necessary to split it, but if you make a good slit in the face of said nut.

With this, it is achieved that the nut will have a few microns in its diameter and loosen due to the blows received. These microns will be enough for the nut to turn and loosen.

If you see that the first time you don’t get it, it’s just a matter of making the slit bigger again until you get it.

This technique is very practical, plus anyone has a chipper and a hammer. It is just as effective as the heat, but in this case, you don’t need a torch. We insist that it is very important that the chisel is very well sharpened.

Use a locknut removal kit if you can’t wait for a new key from the manufacturer.

Kits contain several sockets designed to remove most locknuts. Determine and attach the appropriate size socket for your lug nuts to a regular ratchet and place it over the jam nut.

Turn the lug nut counterclockwise until it comes off. This can strip the nut, so have an extra set of lug nuts on hand.

Locknuts are not designed for use with an air impact wrench, so remove the locknuts with the socket and ratchet.

If you do not have access to a jam nut removal kit, remove the nut with locking pliers.

Tighten a pair of locking pliers around the lock nut. Turn the vise handles counterclockwise to loosen the lug nut.

Use a hammer to strike the vise handles counterclockwise if the nut is difficult to turn by hand.

Turn the lug nut until it can be removed by hand. It may be necessary to re-tighten the vise claws several times, as the nut may strip.

Take your car to a mechanic’s shop if you can’t complete the previous steps.

Most mechanics have tools to remove locknuts and alter them with normal lug nuts.

How to Remove a Stripped Lug Nut- Method 3: Using an extractor

Unfortunately, it happens that when you want to loosen a screw or a seized nut (or conversely by tightening too hard), these parts break.

In this case, to extract the remaining screwed part, it is often necessary to remove the part or element that was to be assembled.

Several cases can then arise:

This is the simplest case since you will be able to:

The stud is broken flush:

The most common solution is to make a hole to accommodate a “pigtail” type extractor:

“American” extractors are presented in a casing, including:

If you do not have an extractor, the operation is more delicate but not impossible.

You will need to drill with a larger bit so that it removes the “core” of the stud, leaving only the threads. It is then possible to extract what remains in the thread.

This operation is quite meticulous, its success depending on the precision with which you will have “pointed” at the center of the stud.

It is often necessary, after this operation, to pass a tap to remake the thread. 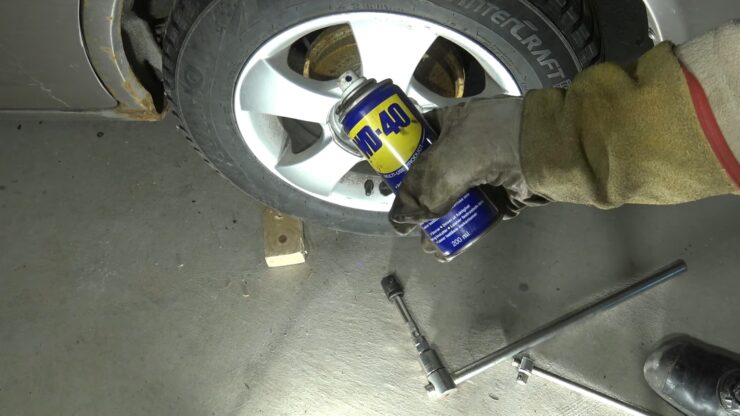 The oiling fluid is indispensable simply in the conditions where you require unscrew bolts with shabby edges.

You first need to spray in the tiny space between the material and the screw. The emollient will be reduced its friction force, which is effortless to reach.

When there is no method that will work, you need to drill that screw.

You can start from scratch, or also you can start it halfway and again screw it in that extractor and eliminate the bolts.

We constantly find screws because of the quality in which its edges break.

Now, too, a high-quality tool can rarely be found because the issue becomes doubly many times relevant. We are sure, after reading this guide, you have proper knowledge on how to remove a stripped lug nut?

In order to work with the mechanisms, in addition to all types of repair and construction wisdom.

It is related to repeated unscrewing and twisting of several bolts, nuts, and similar products. It seems that it is quite difficult.

However, many times in that method of carrying out repairs, reconstructions, and auto modifications, same like any other equipment repair, it cracks out that some screws or nuts were pulled off its edges a long time ago and now it is quite difficult.

If not terrible, unscrew them using the normal methods.